I fired off a quick thread last night offering my rough take on yesterday’s conviction and sentence of Paul Mitchell, the Birmingham City supporter who ran onto the pitch during Sunday’s match between Birmingham and Aston Villa and assaulted Villa footballer Jack Grealish. Below are my provisional thoughts.

What were the charges?

Paul Mitchell was charged with battery, contrary to s39 Criminal Justice Act 1988. He was also charged with an offence of encroaching onto a football pitch (presumably s4 Football Offences Act 1991). He pleaded guilty to both offences at his first appearance today before Birmingham Magistrates’ Court, the offences having been committed yesterday. A good live account of today’s court proceedings can be found here.

Why was the case dealt with so quickly?

Many people have remarked on how quickly this case was processed – barely 24 hours between offence and sentence. But this is not unusual where a defendant is arrested, charged with a summary offence (one that can only be tried at the magistrates’ court) and refused police bail. The police have the power to charge this type of battery without needing the Crown Prosecution Service to authorise the charge (see the Director’s Guidance on Charging), so the process is quicker. A defendant charged and kept in police custody will be produced at the magistrates’ court the next day. If a defendant pleads guilty, the court will usually require a Pre-Sentence Report to be prepared by the Probation Service, to make recommendations as to how best deal with the offender. It’s now common for this to be done the same day. Given that the offence was captured from multiple angles by high-definition television cameras, there was little choice but to plead guilty.

What about the sentence? How did the court arrive at 14 weeks?

Mr Mitchell received 14 weeks’ imprisonment, as well as a 10-year football banning order. He was ordered to pay £100 in compensation to Mr Grealish, £135 in prosecution costs and a mandatory £150 Victim Surcharge.

When assessing sentence, the magistrates are required to follow the Sentencing Guideline for Assault. Here it is: 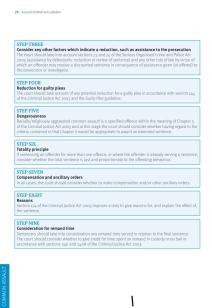 A defendant who pleads guilty at the earliest opportunity – i.e. at his first appearance – is entitled to one third off his sentence. That applies to all defendants, even where, as in this case, the evidence is overwhelming.

This means that the maximum sentence the magistrates could have passed was 17 weeks.

14 weeks is therefore almost as high as they could go.

Looking at the Guidelines, in order to reach this sentence, the magistrates must have put this case in Category 1. This requires a finding of “Greater Harm” and “Higher Culpability”. On its face, it’s not easy to see how they did this (and without full sentencing remarks, we are somewhat in the dark).

There was no injury, and it was a single blow (rather than a sustained or repeated attack), so the only possible feature of Greater Harm was the particular vulnerability of the victim. It might be argued that as a man going about his job surrounded by tens of thousands of excitable spectators and relatively limited security, Mr Grealish qualifies as particularly vulnerable, although it’s a bit of a stretch.

Similarly, the features of “Higher Culpability” don’t immediately recommend themselves. Arguably there was an intention to cause greater harm than was in fact caused, but a single blow without a weapon makes this a tricky argument. Significant premeditation? Doesn’t look like it, unless Mitchell had told others in advance of his plans. Again, we may be left trying to characterise Mr Grealish as vulnerable to get this box ticked.

As for the other aggravating and mitigating features, there hasn’t been a lot of detail provided. The location and timing of the offence are aggravating features (the victim’s place of work in front of a national audience). We don’t know what the Pre-Sentence Report said about Mr Mitchell’s personal circumstances. We know that he had previous convictions for non-violent offences, but it’s not clear what they were and how relevant they were (whether, for example, they related to football). We know that his solicitor expressed remorse on his behalf, and that Mr Mitchell was a father of one with a second child on the way. How these were all balanced is unclear without knowing the magistrates’ full reasons.

I’m loath to draw any firm conclusions without knowing the magistrates’ reasoning, but on its face, it looks as if there would have had to be a fair bit of creative interpretation to get Mr Mitchell into Category 1 and towards the top end.

There is an alternative explanation. The magistrates made clear the need for deterrent sentencing for this kind of offence, and it may be that they held that, even though the offence would ordinarily fall within Category 2 or 3, the circumstances were such that it was in the interests of justice to move outside the category range on the Guideline and into Category 1. This, I’d guess, would be how they would justify the sentence.

The potential for widespread public disorder, as others have pointed out, may well have been a factor which the court treated as seriously aggravating. Context is everything. Those saying “he wouldn’t have got this for a punch in the street” miss the point. This wasn’t the street. It was a deliberate assault involving trespass onto a playing area, calculated to hurt and humiliate a man lawfully going about his job in front of a stadium of thousands and a television audience of millions. I have little doubt that Mr Mitchell has been treated particularly severely because this was a high profile assault; but he deliberately chose to make it high profile. He selected the location and the occasion. Those are aggravating features.

As ever, this whole exercise involves a fair bit of guesswork, because our justice system still struggles to do basic things such as providing a copy of the sentencing remarks in cases of enormous public interest. But that’s my rough take. A stiff sentence, but probably justifiable.

How does this compare to other cases of football spectator violence?

It is difficult and somewhat artificial to compare sentences, but one I’ll mention (because I’ve commented on it before) is the racially aggravated assault on Raheem Sterling. While  taking place outside the training ground rather than on the football pitch, this offence involved a much more serious assault, with repeated kicking (characterised by the Guidelines as using a weapon) which caused bruising, and the use of racist language. The offender was sentenced to 16 weeks’ imprisonment (the maximum sentence for racially aggravated battery is 2 years). I wrote at the time that I thought this sentence, based on the reported facts, was lenient, and this case arguably casts it into even starker relief.

6 thoughts on “The assault on Jack Grealish – is 14 weeks’ imprisonment the right sentence?”